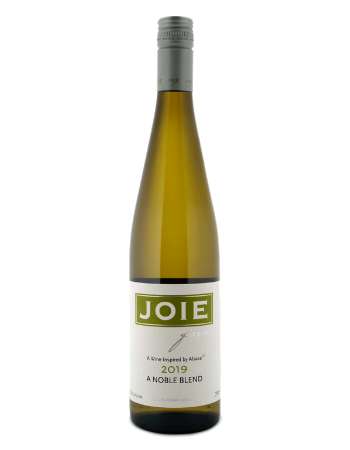 JoieFarm makes A Noble Blend in the spirit of Edelzwicker or Gentil, the traditional Germanic varietal blend of the Alsace region of France. The literal translation of Edelzwicker is “a noble blend”. Noble is also proudly Heidi’s family name. The original intent in choosing to produce this proprietary blend was the knowledge that many of the oldest plantings in the Okanagan Valley are Germanic varietals which have proven to be extremely successful in this climate. Blending allows us to utilize the different characteristics of each variety (or of the same variety from different sites) in order to help us achieve natural balance, year-to-year consistency as well as adding greater complexity. This wine was created out of respect for old-world traditions while learning how to make wine in our relatively young, new- world winemaking region. The 2019 A Noble Blend is a classic blend of Gewürztraminer, Riesling, Pinot Auxerrois and Muscat.

In Stock
Tweet
Wine Specs
Vintage
2019
Varietal
Gewurztraminer
Appellation
Okanagan Valley
Acid
6.9 g/L
pH
3.16
Bottling Date
January 2020
Residual Sugar
2.4 g/L
Alcohol %
12.4
Wine Profile
Tasting Notes
This aromatic wine exhibits an intense nose of guava, nutmeg, and clove. This spiciness continues on to the palate and opens up with unctuous flavours of lychee, coriander and guava carrying through to a grapefruit-fresh finish. Overall, the flavours and texture of this wine are focused and intense.
Vineyard Notes
Paxon Family Vineyard, Naramata Bench; JoieFarm Vineyard, Naramata Bench; Busterfish Vineyard, Naramata Bench; Con Vida Vineyard, Skaha Bluff; Furlot Family Vineyard, Summerland; St. Hubertus Vineyard, Kelowna; Pipars Family Vineyard, Naramata Bench
Production Notes
The vintage began with mild temperatures and little insulating snowpack in January. This made bottling and pruning very pleasant for us, but the unseasonable warmth also caused the soil to warm up, forcing the vines out of dormancy. An extended four-week cold snap in February then froze those awaken vines causing bud damage, cane damage and, in some cases, cracked trunks and straight-up vine death. Many vineyards saw smaller yields in 2019 from this thaw/freeze episode, some in Summerland and Naramata sustaining 70% loss. A lack of snow and rain during that time also meant there was little run-off or soil moisture, making for even lower yields. The spring started uneventfully with budbreak occurring in the first week of May as usual. By early June, flowering would also occur normally, although some wind and rain interrupted flowering in our Riesling vineyard (which was already affected by spotty budbreak and damage from the cold). Summer temperatures were cooler than normal with no heat spikes and many cloudy days. As result, veraison was drawn out – taking at least three to four weeks to complete (an abundance of secondary and tertiary shoots may have aided in extending the process). After a short temperature spike the last week of August and first week of September the rains started and never seemed to stop. (Environment Canada would later confirm that the Penticton area received three times more precipitation than average.) This abundance of rain created intense disease pressure and an overt lack of ripening. The rains eventually stopped with a hard frost of -7°C on October 10th, essentially ending the vintage for all intents and purposes. While it felt like everything that could go wrong did go wrong in 2019, great wine could still be made by those with the experience to act quickly, the ability to pivot and a willingness to be flexible with house style. As a technical, confident winemaker with a strong grasp of organic chemistry, I was able to make rapid-fire picking calls and take immediate action in the winery. Through focusing on lighter, fresher styles and by using blending to achieve balance, we were still able to make the JoieFarm 2019 portfolio full of delicious wines as usual (just with more #maximumeffort and resolve than normally required!)
Winemaker Notes
The grapes were hand-harvested and sorted before de-stemming to ensure that only healthy grapes went into the wine. After de-stem- ming, many of the aromatic varieties were crushed and left to soak for several hours. The bins were gravity fed into the press (much gentler than pumping the must) and a slow, gentle cycle was applied via pneumatic press. The already flavourful juice was then gently racked from its settling tank to ferment. The Gewürztraminer, Auxerrois and Muscat musts were inoculated with an aromatic-forward cultured yeast strain, X-5, to highlight their floral and spicy charms; the Riesling component was inoculated with R-HST (which was specifically developed for cold Riesling ferments). Temperatures were carefully controlled through our glycol chilling system and were not allowed to rise above 16° Celsius in order to preserve the delicate aromatics of the wine. This type of temperature control also allows us to stop fermentation without excessive sulphur use and maintain residual sugar in the wine naturally. Each of the varietal lots were vinified separately in stainless steel. The wine was protein stabilized with bentonite and cold stabilized in chilled tanks, then filtered using a cross-flow (a medium-free method that is the gentlest of any filtering technique). Sulphur levels were carefully managed to pre- serve maximum bouquet; it was added only following the second post-ferment racking and minimally topped up pre-bottling to ensure a stable, consistent product. Careful taste trials determined the final blend. We chose a Stelvin screwcap closure because we feel it is the best method available to preserve the freshness that is key to this wine.
Food Pairing Notes
A Noble Blend is classically enjoyed with a tarte flambée or choucroûte but is an excellent accompani- ment to the modern cuisine of the Pacific Northwest. This coastal cuisine celebrates the bountiful seafood and plant-based cuisine of a Mediterranean climate which often is passively Asian-influenced with ginger, lime and spice.
Other Notes
Gewürztraminer 54%, Riesling 21%, Pinot Auxerrois 15%, Muscat 10%

Sign up to get the latest on new releases, events, special offers and more...