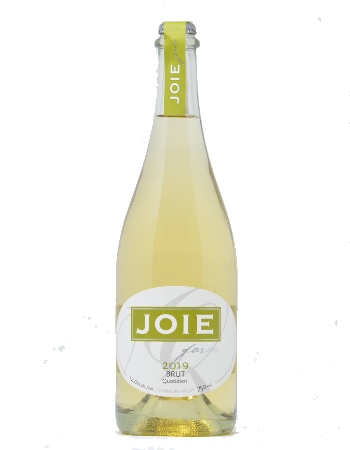 Quotidien means “your daily ration”. In this spirit, our Quotidien Brut was made in JoieFarm’s pursuit of fun, accessible, everyday bubble drinking. The base wine is aged sur lie in neutral puncheons to add texture and “lees-y” biscuit flavours in absence of the slow autolysis of traditional method bubble. Then, the base wine was blended with carefully and intentionally oxidized Riesling from our cellar solera prior to second fermentation by Charmat method. Made from Chardonnay and Riesling grapes, JoieFarm Quotidien Brut hangs its hat on BC’s signature varieties and Canada’s potential to be a serious player in the sparkling wine world. It is a modern, new-world bubble to be enjoyed with regularity.

Out Of Stock
Wine Specs
Vintage
2019
Varietal
Riesling/ Chardonnay
Appellation
Okanagan Valley
Acid
8 g/L
pH
3.2
Residual Sugar
1.5 g/L
Alcohol %
12
Wine Profile
Tasting Notes
Vigorous, fine mousse creates a mouthful of lemon meringue and zippy citrus flavours precisely balanced by juicy, racy acidity. The beautiful, lingering, toasty finish is complex. A versatile bubble always ready for fun.
Vineyard Notes
Furlot Family Vineyard, Summerland; St. Hubertus Vineyard, Kelowna; King FamilyVineyard, Naramata Bench
Production Notes
The vintage began with mild temperatures and little insulating snowpack in January. This made bottling and pruning very pleasant for us, but the unseasonable warmth also caused the soil to warm up, forcing the vines out of dormancy. An extended four-week cold snap in February then froze those awaken vines causing bud damage, cane damage and, in some cases, cracked trunks and straight-up vine death. Many vineyards saw smaller yields in 2019 from this thaw/freeze episode, some in Summerland and Naramata sustaining 70% loss. A lack of snow and rain during that time also meant there was little run-off or soil moisture, making for even lower yields. The spring started uneventfully with budbreak occurring in the first week of May as usual. By early June, flowering would also occur normally, although some wind and rain interrupted flowering in our Riesling vineyard (which was already affected by spotty budbreak and damage from the cold). Summer temperatures were cooler than normal with no heat spikes and many cloudy days. As result, veraison was drawn out – taking at least three to four weeks to complete (an abundance of secondary and tertiary shoots may have aided in extending the process). After a short temperature spike the last week of August and first week of September the rains started and never seemed to stop. (Environment Canada would later confirm that the Penticton area received three times more precipitation than average.) This abundance of rain created intense disease pressure and an overt lack of ripening. The rains eventually stopped with a hard frost of -7°C on October 10th, essentially ending the vintage for all intents and purposes. While it felt like everything that could go wrong did go wrong in 2019, great wine could still be made by those with the experience to act quickly, the ability to pivot and a willingness to be flexible with house style. As a technical, confident winemaker with a strong grasp of organic chemistry, I was able to make rapid-fire picking calls and take immediate action in the winery. Through focusing on lighter, fresher styles and by using blending to achieve balance, we were still able to make the JoieFarm 2019 portfolio full of delicious wines as usual (just with more #maximumeffort and resolve than normally required!)
Winemaker Notes
The Chardonnay component of the base wine was picked in passes over two weeks in early September, ensuring a low potential alcohol with the first pick and brisk acidity on the second (riper) pick to add optimum flavor to the base wine. The base wine was slowly pressed on a whole-cluster press cycle and the resulting must was hyper-oxidized to stabilize colour and flavours. The Riesling component was picked in the second week of September, ambiently fermented separately, then blended with the Chardonnay. The base wine for this bubble sat on its fine lees over the winter of 2019 in neutral 30 hL French oak cask. It was then blended with the addition of wine from our Riesling solera that was slowly and gently oxidizedwith with no addition of sulphur. In absence of the autolysis that occurs in traditional method, this technique of lees and neutral barrel aging achieves an interesting and sophisticated, biscuity-fresh and slightly nutty palate to begin a second fermentation. This blend was made sparkling by a second ferment using a pied de cuvée, a Champagne yeast and sugar addition of 13g/L right into the pressurized, Charmat tank which took the wine up to 11.9% alcohol. We chose to add no dosage to the 2019 Quotidien Brut.
Food Pairing Notes
A satisfying accompaniment to fresh oysters, fried olives, gourgères and salty, aged cheese.
Other Notes
Riesling 43%, Chardonny 57%

We get up to a lot of cool things and we love sharing them with cool people, like you!